You may well be thinking ‘why only three?’ In fact, I could be easily writing about thirty three enchanting places to visit in Occitanie, if not many, many more. But I’ve decided on three because our eldest son and his girlfriend came to stay for a few days, recently, and these were places we visited with them.

First some history! Occitanie, the administrative region, was created on 1st January 2016 from the former regions of Languedoc-Roussillon and Midi-Pyrénées.

This large area has it all – varied landscapes, fascinating architecture, interesting culture, stunning sights and of course, sunshine!  Festivals, markets, gastronomic delights…shall I go on? In that case: the Pyrénées, the Canal du Midi, Mediterranean beaches… I’m beginning to sound like a walking tourist board but I’m obviously biased because this is the area we chose to buy our house!

The first must see place is Toulouse. We have visited several times and I only wish I had got to know Toulouse sooner. It really is the most fantastic city and is often referred to as ‘La Ville Rose’ (The Pink City) because of the colour of the bricks that are used in many of the buildings. 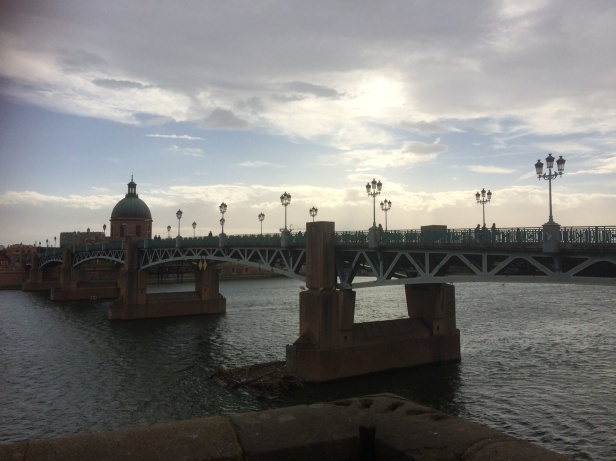 I would certainly recommend Toulouse for a long weekend or a city break. Whatever your tastes, there is something for everybody: retail therapy, culture, history, art, cafés and so much more. I love walking and there are several self guided walks one can enjoy around the city. All you need is a good map (available from the tourist office) or leaflet. The leaflet we used last year cost about 1 Euro with a choice of five varied walks. We managed three of them; one focused on the historic centre of Toulouse, another took us to the green areas of Toulouse, including a section of the Canal du Midi, as well as several beautiful public gardens and, last but not least, possibly my favourite, along the banks of the Garonne, from one side to the other.

More on Toulouse in the future.

My second enchanting place to visit, in Occitanie, is Carcassonne. In particular, la Cité. We first visited a few years ago, in August. Big mistake! It was unbelievably hot within the city walls and unbelievably crowded.

However, when we visited with our son and his girlfriend everything was perfect! The first view of the citadel is breath taking. It resembles a fairy tale castle and it is rumoured that it was the inspiration for Walt Disney’s Sleeping Beauty.  In reality, it was declared a UNESCO World Heritage in 1997.

There has been a settlement where the Cité now stands since before Roman times and it has certainly suffered through the ages. It has been besieged, burnt and neglected. Although you wouldn’t think so when you see it now. This is because it was restored by Viollet-le-Duc in the nineteenth century. Some people are of the opinion that he ‘over restored’ the citadel, as several of the features he included, such as the pointed roofs on the towers and arrow-slits would not have been there originally. You will have to visit and decide for yourself!

In the meantime, do have a look at this video which was put together by Crème de Languedoc

My third enchanting place is possibly overusing the adjective ‘enchanting’ but I still feel the need to include it – Castelnaudary! My son and his girlfriend had no choice but to visit this small town because this is where we have our home. Obviously I am biased but it was standing looking at the views over the Canal du Midi, towards the port, that really enchanted me in the first place.

Have you ever visited this part of France or any of these places? If you had to name three enchanting places that you have ever visited, anywhere in the world, which would they be? I’d love to know!

8 thoughts on “3 enchanting places to visit in Occitanie…”