Not necessarily three items that one might expect to see in the same phrase! All will become clear…

I have written before about the organisation AVF which welcomes new arrivals to France; all nationalities and all ages.

Last month we were invited to attend the AVF welcome meeting in Castelnaudary. We didn’t know what to expect but it turned out to be a really fun gathering. A welcome speech was given by the mayor (not too long…!) and was followed by a delightful musical interlude. This was provided by a local orchestra made up – mainly – by local school children. I couldn’t help noticing that all the pieces they played were English, including the Beatles and Adele!

After the music, all newcomers were presented with a gift bag containing a Castelnaudary mug, among other items. A very nice touch, I thought.

And the clown? Well, there were people of all ages, including children, and the clown provided entertainment while everyone was waiting for the main event to start. His speciality was making models out of balloons and he made some of the older guests some amazing hats. If only I’d taken some pictures…

The evening finished with a most welcome apéritif and general mingling! Those of us who were new to Castelnaudary had a badge to wear, so that other long term residents would make a point of welcoming us which they certainly did.

I was so pleased to see several people that we knew already, including some of my English conversation students. It really made us feel part of the community, especially now that we are on ‘kissing terms’ when we meet up with them!

In fact, I wrote a previous blog post about kissing -or not – when greeting people in France:

What do you think? 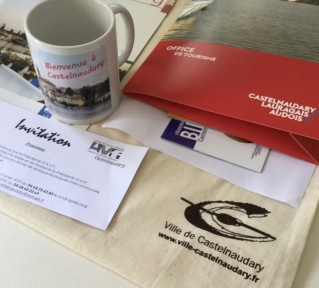 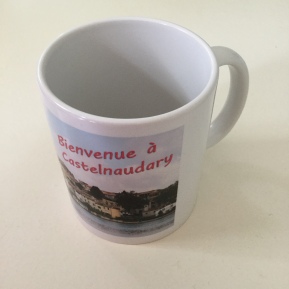